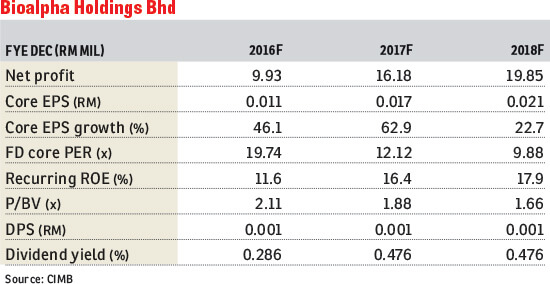 The company’s issued share base will rise from 667 million shares to 800 million shares post-rights issue. The company aims to raise RM26.7 million in cash, mainly for working capital to launch 27 new products in Malaysia, Indonesia and China as well as organic herb planting activities for its Phase 2 comprising 880 acres (356ha) of land in Pasir Raja, Terengganu.

By the end of Phase 2, more than 100 types of herbs will have been planted by the company.

KUALA LUMPUR (Nov 18): ACE Market-listed health supplement company Bioalpha Holdings Bhd has fixed the issue price of 20 sen per rights share and exercise price of 22 sen per warrant under its proposed rights issue with free warrants, which is expected to raise RM26.7 million.

In a statement today, Bioalpha managing director William Hon said the company is one step closer to raising funds for its business expansion plans to launch new products in Indonesia, China and Malaysia.

“For the immediate term, our shareholders benefit from being able to increase their equity participation in Bioalpha through the subscription of the rights shares and warrants,” he said.

Hon also said the shareholders of Bioalpha understand the funds raised from the corporate exercises will be used for good reasons and they will ultimately benefit from the future earnings derived from the expansion plans.

About 50% of the proceeds will be utilised to fund Bioalpha’s business expansion plans to launch new products in Indonesia, China and Malaysia, and the balance will be used for capital expenditure, expansion of its agriculture business operations and working capital purposes as well as to defray corporate expenses associated with the exercise.

The exercise, which was first announced in September, entails proposed renounceable rights issue on the basis of one rights share for every five existing shares held, together with one free warrant for every rights share subscribed.

The issue price of 20 sen per rights share represents a discount of 11.1% to the theoretical ex-rights price (TERP) of about 22.5 sen, based on the five-day volume weighted average market price (VWAP) of its shares up to Nov 17 of 23.52 sen.

Meanwhile, the exercise price of 22 sen per warrant represents a discount of 2.2% to the TERP, based on the five-day VWAP up to Nov 17.

The proposed rights issue with warrants had earlier received approval from Bioalpha’s shareholders during an extraordinary general meeting held on Nov 15. The exercise is expected to be completed by early January next year.

This article first appeared in The Edge Financial Daily, on January 5, 2017.

Nevertheless, the additional undertakings were not called upon given the positive response from the shareholders who took up all the rights shares allocation.

The proposed rights issue with free warrants will raise gross proceeds of RM26.7 million based on the issue price of 20 sen per rights share. The proceeds will be used for Bioalpha’s expansion plan.

The target completion date of the proposed exercise is Jan 10, 2017.